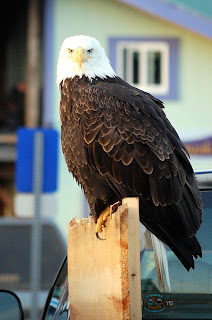 The next weekend was leading up to our week off for Christmas, so we hung around town. It wasn't fun to be away from family for the holiday but we made the best of it by renting a car and heading south. We left out on a Monday morning with plans to visit the Kenai Peninsula. In the summer months this is where the action is for sport fishing of salmon and halibut. It also sees a number of tourists who come for whale watching and glacier gazing.

Once again we had to travel around Turnagin arm and then travel through the Chugach Mountains.

Our first stop was at an animal refuge. Injured animals are brought here to recuperate and leave, or sometimes live out the remainder of their days. We saw caribou, musk ox, elk, bison, sitka deer, and an actual wild eagle that landed in a nearby tree. Along the way we saw dog skiing and ice fishing.

Our first stop (other than picture taking) was at a little cafe called the Sunrise Inn in Cooper Landing. We had buffalo chili which was excellent. We're finding that Alaskans know how to make chili. Cooper Landing is home to about 250 people 8 months out of the year, but in the summer months it is home to thousands who come to fish the glacier formed Lake Kenai. What a beautiful spot. The water is the color of water you see might see in the Caribbean.

As a side note, the car we rented was a Dodge Caliber. I haven't driven one before, but it did quite well on the slushy roads.

After leaving Cooper Landing we worked our way out of the mountains onto the flat marsh land. We stopped at a little shop in Sterling and saw some really interesting work done by Alaskan artists. Robin also found a great deal on some black cultured pearls.

We visited St. Elias brewery, a small micro-brew/restaurant in Soldotna. They have a great oatmeal stout and a red for Robin.

Then it was on to our bed and breakfast. We stayed at the Log Cabin Inn in Kenai. It was very affordable, the breakfast was great, and our hostess Teresa made us feel right at home. We made that our home base for the two days we would stay on the peninsula.

Next morning we woke early, had breakfast and began the trip to Homer, which is at the south tip of Kenai peninsula. Almost immediately we saw a mama moose and her calf by the side of the road.

En route to Homer we made several photo stops along the way. A small fishing community, Cook inlet, the most western road in the US, and others.


The drive into Homer was nothing short of spectacular. As we pulled into the turn out overlooking the town and the bay the play of light and clouds was truly amazing. We both jumped out and shot pictures for close to half an hour. Here are a few.

Part of Homer is located on what is known as a spit. It's an outcropping of land that juts out into the water. We drove out on the spit for two reasons...to see eagles and visit The Salty Dawg Tavern. We were successful on both counts.

The Salty Dawg was seen on the Deadliest Catch, which is a show about Alaskan Crab fishermen. Mike Rowe interviewed the captains here.

After a few hours in Homer we headed back to a warm bed and a good night's sleep. Robin held a beading class for the family when we got back and I sat around and played guitar with the oldest son. A great evening.

Too soon it's time to go, so we loaded up and headed for Anchorage. Other than stopping in again at the Sunrise Inn for chili and crab cakes, the trip "home" was uneventful.

Take care...Tony
Posted by Tony Logue at 8:53 PM No comments:

The next weekend we traveled north and stopped at the small town of Talkeetna. It is a little community about 125 miles north of Anchorage and just south of Denali National Park.

We ate at a small restaurant/tavern/lodging spot called the Roadhouse. I ate the lasagna and Robin had the reindeer chili. The food was awesome and the service was as well. Here are a few photos from our stop in Talkeetna. The most fun was getting photos of Mount McKinley which was still 125 miles away.

The first weekend excursion was to Girdwood, which is about 45 miles east of Anchorage. Girdwood is a quaint little town with a post office, a couple of little restaurant/bars, and a few service businesses that support the ski lodge, Alyeska Lodge, close by.

On the way to Girdwood you have to follow the Turnagin Arm, which is an inlet that has a large tidal swing resulting in extreme low tides and what is known as mud flats. The next set of pictures are photos we caught on the way to and around Girdwood. Dall sheep frequent the mountains around the Turnagin arm, and the sky and clouds change by the second.

Posted by Tony Logue at 8:12 PM No comments: